When you think about technologically advanced cars, you don't automatically think about the potential for your private information to be jeopardized.

Automakers are currently thinking about this, however, and have presented a set of principles to the Federal Trade Commission in a bid to protect motorists' privacy.

GPS and Mobile Communications in most vehicles are able to collect information such as where drivers have been and where they're going, for example.

Apparently, the National Highway Traffic Safety Administration is currently working with automakers to pave the way for vehicle-to-vehicle communication. This would allow information such as vehicle position and speed to be communicated to a vehicle's on-board computer system, and alert drivers to impending collisions.

At what point does safety technology cross over to an infringement of your privacy? It's definitely something to think about....

You can read more here, at the Globe and Mail!

It's an interesting predicament: when gas prices skyrocket, people seek out smaller cars, but once those prices plummet, they go straight to the big trucks and SUV's.

This is very characteristic of the US market where people prefer 'big' things, and big vehicles being a staple.

Better fuel efficiency vehicles and a better economy make buying a big car less guilt inducing. And it seems that the coming year, 2015, will see this trend continuing.

Electric and hybrid vehicles have seen a very big decline in sales as gasoline gets cheaper, leaving automakers to wonder how to adjust to buying patterns that match wildly swinging gas prices. Analysts say that you just simply can't adjust for this.

You can read more about this issue HERE!

For those of you who hadn't heard, a corvette museum in Bowling Green, KY, had a disastrous run-in with a sinkhole.

A massive sinkhole opened up in the Skydome showroom of the National Corvette Museum and devoured 8 gorgeous sports cars this past February.

The museum has only now gotten workers to start plugging the hole, and removing the wreckage. 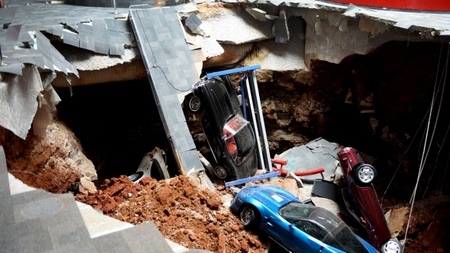 Turns out, the sinkhole 'revved' up attendance and revenue at the museum as patrons stopped to check out the damage and gape at the hole. The museum also made money by creating 'souvenirs' from the damage, like postcards and jars filled with dirt and tiny car parts.

You can read more about this interesting phenomenon turned money maker HERE!

Gas is becoming cheaper and cheaper... the cheapest in 2 years in fact, because of a surplus in the world gasoline supply!

As of Tuesday, gas prices across Canada averaged 1.23 per liter, whereas in June prices were 1.43.

Experts believe that prices will fall even further in the coming weeks.

Read more about this here, at CTV News!

New studies have shown that talking to your car or your phone while driving is not as safe as you think it is.

The reason is that many of these systems are so complex to use and really error-prone. In fact these systems require much more of your attention, not less! They've been equated to doing word memorization or difficult math questions while driving.

The worst among the systems tested were Siri and Chevrolet's MyLink.

These new studies completely contradict claims made by automakers, who state that their technology makes driving safer.

Regardless, what's clear is that in order for this hand-free technology to actually make your driving experience safer, there needs to be improvements in the functioning of these programs. In particular, voice recognition errors needs to be eliminated.

Have you ever wondered why you can't buy those zippy European cars here in Canada? And why there's so much red tape?

Why do such restrictive regulations exist in Canada?

It seems that none of those European cars meet Transport Canada's standards, even then innovative V40 hatchback from Volvo which features the first ever pedestrian air-bag.

The main problem actually boils down to money... doesn't it always? It would cost car makers a lot of it to retest or modify their cars to suit Canadian rules.

Canada is in the process of harmonizing automotive standards with the US, but not with Europe. This is sending a mixed signal to European auto makers to say the least.

You can read more about this issue HERE.

In Portland, Oregon, a pizza delivery driver on his way to delivering a fresh pizza to a hungry customer, gets into a car crash.

He's injured, and cannot complete his delivery. (For those wondering, he was not seriously injured and made a full recovery)

Cops at the scene finish his delivery for him. The poor customers, understandably, were concerned when they saw the two officers approaching their house.

In the end, the pie gets delivered and everyone has a good laugh.

**This article was found at the Globe and Mail

'Cars and Fashion' is the title of this year's Paris Motor Show, taking place from October 4th til the 19th.

50 iconic vehicles will be featured that have both influenced the motor vehicle industry, as well as fashion.

The exhibit will be divided into important moments in automotive history, beginning with the pre-WWII era, and ending the modern age.

You can read more about this fascinating show here! 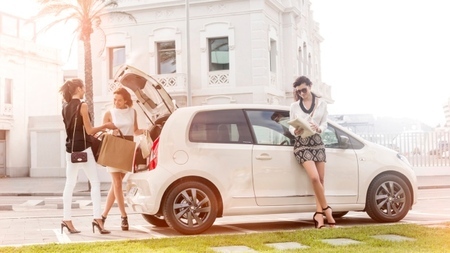 A new, very hot Civic Type-R is making it's appearance in Paris, France for the Paris Motor Show.Keeping everyone on their toes, Honda won't release any figures regarding the car's performance until it's official unveiling October 2nd. 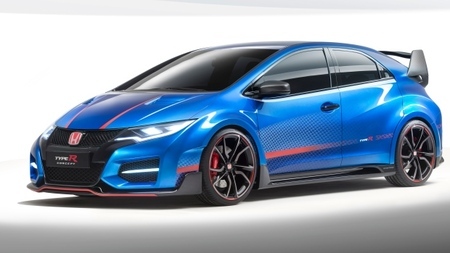 You can read more here!

The 2015 Dodge Charger SRT Hellcat , the first ever, has just sold at auction for $825 thousand US to NASCAR team owner Rick Hendrick.

Read more about it here! 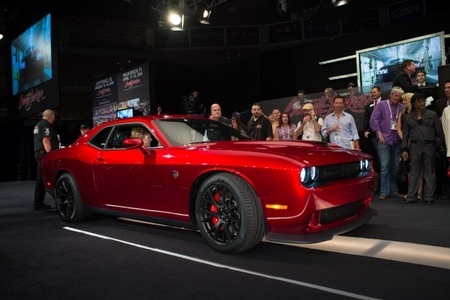